James Ridlon – “Riddles of Excellence” – 1989 Sport Artist of the Year 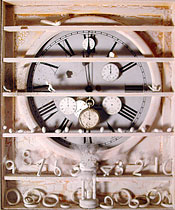 Football played an important part in Ridlon’s artistic works, acting as a theme for many of them. A painter and a sculptor, Ridlon is probably best known for his three-dimensional pieces called assemblages. For his assemblages, Ridlon pieces together just about everything imaginable to convey his artistic message: toy soldiers, pieces of yarn and wood, parts of football uniforms, bicycle parts, to name a few.

Ridlon’s work is displayed in over 500 public and private collections including the Munson-Williams-Proctor Art Institute in New York, The Juilliard School of Music in New York and the Art Gallery of Hamilton in Ontario, Canada. His art has been featured in over 100 group art shows and 37 solo shows such as the Canton Institute in Ohio, the Zenith Gallery in Washington, D.C. and the Herbert F. Johnson Museum at Cornell University in New York. 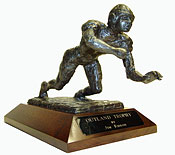 Ridlon amassed over 20 prizes and awards as an artist and as a teacher. He was named Football’s Man of the Year in Arts in 1976, Letter Winner of Distinction at Syracuse in 1983, College Educator of the Year in 1987 by television networks CBS and ESPN, and was inducted into the Syracuse Hall of Fame in 1990. In 1997 Ridlon received the Outstanding Faculty Award from Syracuse’s School of Art and Design and an honorary doctorate from Cazenovia College.

Ridlon’s assemblages, for their uniqueness and easily assimilated specificity to particular projects, propelled his fame. He was commissioned to create a piece for ABC Television to commemorate the 25th anniversary of its Wide World of Sportsprogram. The assemblage, a 12 ½ by 8 feet collection of memorabilia, consisted of, among other things, ice skates from Olympic figure skater Peggy Fleming, a robe from boxer and three-time World Heavyweight Champion Muhammad Ali, and a soccer ball from Brazilian superstar Pele. He was also commissioned to create assemblages for the 20th anniversary of ABC’s Monday Night Football program and the 100th anniversary of Syracuse football program.

Perhaps the most recognized Ridlon commission is a sculpture made for the Football Writers Association of America called the Outland Trophy. The trophy, an award given annually to the best collegiate interior lineman, was an inspired and challenging piece for Ridlon. He said, “I wanted to get the look of a player of the 1940s, when the award was originally given. I also wanted to make the face ambiguous—it could be white or black—so the person who wins the trophy can see himself in it.” Commenting on the trophy, Morin Bishop of Sports Illustrated wrote, “No-necks or not, the nation’s grunts can finally hold their heads high.”

While sports are important to Ridlon’s art, scenic, outdoor landscapes continue to have an equally vital impact, especially with his acrylic paintings. “Changing Seasons,” a series of under glazed acrylic paintings, depicts the seasonal shifts of Central New York through 80 small, paintings. Though his assemblages are widely recognized, and perhaps the most viewed and curious pieces of art in the American Sport Art Museum and Archives, Ridlon prefers painting to all other media as a means of expression.