“A Voice of Historic Visions” – 1997 Sport Artist of the Year 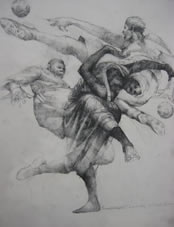 Visions from history were this soldier’s hell until they shone light on an unexpected path to his salvation. In 1969, returning from two years service in Vietnam, Paul Goodnight was haunted by nightmares from his war traumas that triggered a stutter so severe that he could barely speak. His attempts to block the memories with drugs proved futile. Then a tragic event offered Goodnight what he called “a reprieve” from the search for oblivion. The suicide of a close friend jolted him out of his private world and into a quest for a way to live a full life even with the pain. After quitting drugs, Goodnight began exploring his childhood practice of using art to communicate.

“Art is making me, rather than me creating it.” ~ Paul Goodnight

Goodnight’s visions became his guide. He started painting scenes that chronicled the agonies of history as well as the ecstasies. He drew people at moments of achievement, surrounded by images from their history as well as their present struggles to show how every part of their lives contributed to the triumph. Developing his own style, he often painted portraits of great athletes filling the space around the figures with symbols of their cultural heritage. In his own history, he researched elements of his African roots and presented them as part of the stories in his paintings. Goodnight had found his voice.

“When the artist can make art the medium for a greater love, only triumph is possible.” ~ Barry Edmund Gaither, Director, National Center for African-American Art.

Realizing that this passionate hobby could become his profession, Goodnight pursued in-depth training. His studies at the Massachusetts College of Art led to completion of his Master of Fine Arts degree. Several influential African-American artists, including John Biggers and Alan Rohan Crite, became his mentors.

Goodnight had had supportive caregivers around him from an early age. Born in Chicago, he moved to Connecticut with a loving, nurturing foster family. Goodnight’s understanding of art’s potential role in his economic survival started in childhood. As a schoolboy, when he didn’t like what he found in his lunch bag, he sold pencil sketches of nudes at 25 cents each to schoolmates. He used the income to buy a hot lunch. Remembering this cycle as an adult, Goodnight and his partner, Bernice Robinson created Color Circle Art, an organization based in Boston dedicated to developing both artistic and business skills in young artists, as well as publishing and providing fine art information and consulting to collectors across the globe. Aziza, the daughter of Robinson and Goodnight, carries on the family tradition of helping young artists by teaching art in Boston schools. 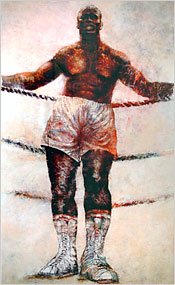 When several of Goodnight’s paintings were included in the sets for popular television shows, the media exposure widened the audience for his work and brought him many celebrity clients. Former Detroit Pistons point guard Isiah Thomas and actor Wesley Snipes became frequent buyers of Goodnight’s work. His first foray into the television outlet came in 1984 when one of his paintings was included in a set for “The Cosby Show.” After the positive response from that break, use of his art on other shows followed, including “Fresh Prince of Bel Air,” Seinfeld,” “ER,” and the film “Ghost.” Goodnight regularly continued sending paintings to the Hollywood Cinema Arts organization that chooses artwork for productions.

Since 1984, Goodnight’s art has gained acclaim from exhibitions in such prominent arenas as the Boston Museum of Fine Art and Schomberg Institute, New York. His pieces hang in many distinguished galleries and museums, including The Smithsonian in D.C. In 1996, he was commissioned to design the commemorative poster for the Atlanta Summer Olympics. In 1997, the United States Sports Academy chose Goodnight as their Sport Artist of the Year. In 1998, Goodnight designed the World Cup Soccer poster. His painting titled, “The Network” is part of an international traveling exhibition for the 2010 World Cup in South Africa. With their impact on representing multi-cultural themes, Goodnight’s visions from history now make history and offer inspiration to people worldwide.

“I feel I’m contributing positively and getting a sense of confidence and pride by doing something that people consider worthwhile for spiritual, material and/or educational reasons. And it keeps me out of trouble.” ~ Paul Goodnight