“Artists are like the shamans in most native cultures; they are sacred drummers whose creative works are conduits for spiritual messages from the collective unconscious.”Tafa 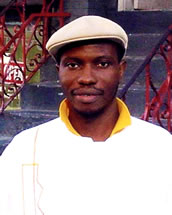 Even though his homeland is Ghana in West Africa, Tafa says that Harlem, U.S.A. has always played an influential part in his daily life. In the capital of Accra where Tafa grew up, he recalls with nostalgia gathering places like the Harlem Café and also The Apollo Theater, one of the major entertainment centers named after the historic hotspot famous in New York as the showcase for glittering African-American talent during its heyday in the early to mid-1900s. On both continents, these cafes and nightclubs served as centers of social and cultural exchange as much as they functioned as entertainment centers. Tafa completed his Bachelor of Arts Degree from the College of Art, Kwame University of Science and Technology in Ghana. Today, Tafa lives and maintains his painting studio in Harlem, New York, where he continues to engage in the artistic cross-cultural pollination that inspired many of his childhood dreams of becoming an international artist.

Tafa says that he has been moved to create art from infancy, since he “heard the drums through my mother’s umbilical cord.” The many top flight cultural institutions in New York such as the Metropolitan Museum of Art, the Museum of Modern Art, plus the rich variety of ethnic communities provide endless artistic stimulation. In New York harbor, The Statue of Liberty draws Tafa’s attention in a special way because of its symbolic celebration of multi-cultural tolerance and civil liberties, issues close to his heart. In 2002, Tafa created an installation titled, Blindfold the Statue of Liberty, on Ellis Island to spotlight these themes. He also believes that sports scenes illustrate similar kinds of themes.

“I paint sports themes because they are a universal form of communication that is replete with powerful, multi-layered symbolism. Team sport fosters hard work, fraternity, excellence, and international understanding. Sports can bridge gaps between people all over the globe. It is an area of life that underlines Dr. Martin Luther King’s vision that people should be judged by the content of their character. In sports, a poor Brazilian boy could blossom into the legendary Pele. Andre Agassi could be an idol of the world.”~ Tafa 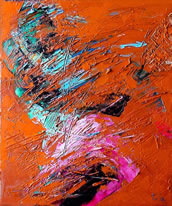 Though Tafa draws on a wide variety of subjects in his artworks, including music, socio-political issues, and religion, sports themes hold a special allure. Tafa sees sports as a vehicle for positive worldwide communication of fraternity and a sense of cooperation among peoples of all nations. His sport art is contemporary, powerful, and unique, marked by the visual characteristics and themes that he has become identified with as an artist: joy in movement and life energy, spiritual awareness, celebration of striving for excellence, diversity with harmony.

“Most painters are also musicians of some sort – painting, music, and breadth are the trinity of harmony in life. The two art forms complement each other. I play the drums a bit, and I love to sing. Recently, while attending a formal dinner in honor of the First Lady of Malaysia’s efforts for world peace, I was urged onstage by the actor, Jamie Foxx, and sang the Zulu national anthem, ‘nkosi sikeleli Africa’, with him. Sometimes when I paint, I can hear the rhythms and sounds of the hues.”Tafa 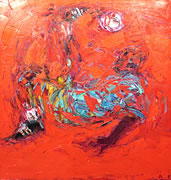 The thick oil paints applied by palette knife, strong designs with distinct sections of bright colors, and spiritual themes combined in his unique patterns often laid down in vertical strips are key elements in Tafa’s new vision of sports topics. These elements and patterns reflect a lifetime of exposure to one of Africa’s cultural gems, the exquisite hand woven Ashanti and Ewe textiles of Ghana called kente cloths. Subconsciously, Tafa structures many of his most beautiful and powerful paintings in the strips of bright color and abstract shapes characteristic of these weavings. The fact that the abstract designs and color schemes of kente cloths are all symbolic of spiritual themes makes this underlying aspect of Tafa’s style a powerful element to enrich his expert sense of structure and energizing paint textures.

In 2010, the United States Sports Academy honored Tafa with their Sport Artist of the Year award for his unique contribution to the field. He visited the campus in Daphne, Alabama, to receive his award. Numerous galleries, museums, cultural and educational institutions, and private collections exhibit his works, including the Superior Court, Washington, D.C., the National Museum of Ghana, the Swiss Collection, Carver Federal Bank, and the private collection of former New York City Mayor, David Dinkins. The Federation of International Football Association (FIFA) coordinates an art exhibit along with many of its sports events. In 2010, FIFA has organized a travelling art show associated with their soccer events in South Africa. Two paintings by Tafa are included in this international exhibit. 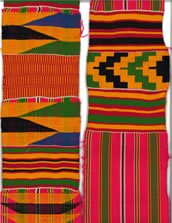 A prolific painter of unique contemporary visions, Tafa follows the calling of sacred drummer from his African heritage to communicate spiritual healing through his art. As a native of Ghana, resident of New York, citizen of the world, and international artist, Tafa hopes to spread a message of global peace and tolerance with his paintings. Sometimes he is asked what kinds of themes he would like people to think about while viewing his artworks. Tafa often responds with words engraved on a plaque inside the Statue of Liberty that express the classic humanitarian dream, not only of Americans, but also shared by the entire human family and all the major religions: “Give me your tired, your poor, your huddled masses yearning to breathe free!”(The Ticker, vol. 82-5, Baruch College,2002). 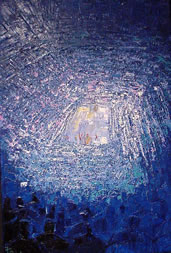 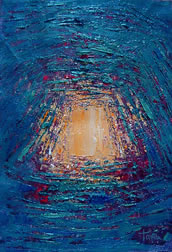