Cristóbal Gabarrón – “The Maestro” – 1992 Sport Artist Of The Year 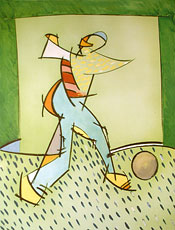 His work is both abstract and representational, often showing a transition between the two that involves the viewer in the process of moving from the literal or corporeal into the symbolic and mystical. A simplified outline of a human body becomes Gabarron’s calligraphy for expressing universal themes. His patterns of dots and lines seem reminiscent of Morse code or hieroglyphics, transmitting the sense that one is looking at a dream language that one could translate with more mental and emotional immersion. The images often seem generic and the symbols multi-cultural to give his work universal social meaning and timeless relevance. His moods and themes are mixed to convey the coexistence and transformations of tragedy and triumph. 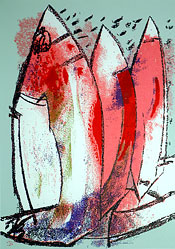 Regardless of dimensions, almost all Gabarron art has a monumental feel. This quality communicates the artist’s view of the smallness of humans in relation to contemporary society as well as the immensity of life’s mysteries in relation to what is humanly knowable. His dancing figures and bold colors counterbalance the oppression of the immense obstacles depicted and create an overriding hopefulness and joy in even his most ominous images. Most of his works invite the viewer to enter into the exploration of his monumental themes, either by leading the eye around the painting or by allowing the person physically to walk through his sculptures and consider the elements from many sides.

While Gabarron’s Spanish roots are clear in his symbols, his universal themes have made the work resonate with people everywhere. Gabarron’s sculptures and paintings are displayed worldwide and continue to be a masterful voice for the eternal human issues, dignity, freedom, and joy in creation.

“Everything you can imagine, the result of the relation of man with his surroundings, in his daily life, in his personal fight; man face to face with his manhood and face to face with Nature… And what follows, besides the ambiguity of the approaches, to which all these subjects contribute, is for me a thrilling challenge to which I cannot resist and to which, with absolute certainty I succumb to day by day.” ~ Gabarron, “Whispers in Silence,” p. 240

Paul Cezanne’s white spaces between brush strokes formed a sense of air and transparency, while his constructions of disjointed blocks of color created a sense of weight and mass. Cezanne’s original style blasted all observant artists of his time out of the old visual styles and into the modern era. Cezanne’s work influenced the Fauves and the Cubists and continued to transform all significant art in the early 20th century. His paintings made visible in a unique way the building blocks of objects and spaces and the interaction of planes.

The visual representation of the internal structure of objects and air is peculiarly 20th century in its references to discoveries in physics and chemistry. It places Cezanne (1839-1906) in a revolutionary realm of his own among the artists of the late 1800’s and early 1900’s. Cezanne’s structural elements were very influential on Gabarron’s early Cubist sculptures and on his early paintings. Gabarron added his own surprising element to this mix by fusing biological and inanimate objects into new painterly beings that float and dance through his works like ageless organic robots telling timeless stories about humanity.

The French artist, Henri Matisse (1869-1954), began painting in conventional styles. Then his vision was freed by seeing Cezanne’s Cubist paintings that fractured natural forms into sections of light and color on different planes. Cubism led Matisse to experiment with new combinations of color and form. These explorations eventually led Matisse into the movement of Les Fauves (Wild Beasts), artists who selected paint colors largely for their emotional values. Continuing to invent even into advanced age, a weak and bedridden Matisse found a fresh way to create by cutting paper into large, expressive shapes and arranging them fluidly on canvas. Matisse’s combination of expert training and respect for unpredictable inspiration led to his joyful style that is both simple and sophisticated. It is the abandoned, primitive power of these late works by Matisse whose influence shows so profoundly in much of Gabarron’s work.

Matisse and Gabarron share the ability to create simple images that can communicate complex statements. Matisse said, “I have always tried to hide my efforts and wished my works to have the light joyousness of springtime, which never lets anyone suspect the labors it has cost me.” The intriguing mystery created by this contradictory style is an intentional and significant part of both artists’ greatest works.

Jean Dubuffet’s Art Brut or Raw Art style strives for vitality and expressiveness through combinations of unexpected media and creative input free of conventional academic restrictions. Dubuffet (1901-1985) collected art by inmates of mental asylums. He posited that mainstream culture assimilates each new development so that genuine expression is smothered. Only Art Brut can speak with pure creativity from those who remain untrained and unassimilated. Dubuffet valued Art Brut as evidence of humankind’s innate creative drive.

“Those works created from solitude and from pure and authentic creative impulses – where the worries of competition, acclaim and social promotion do not interfere – are, because of these very facts, more precious than the productions of professionals. After a certain familiarity with these flourishings of an exalted feverishness, lived so fully and so intensely by their authors, we cannot avoid the feeling that in relation to these works, cultural art in its entirety appears to be the game of a futile society, a fallacious parade.” ~ Jean Dubuffet; “Make Way for Incivism;” Art and Text #27 (Dec. 1987 – Feb. ‘88); p. 36.

Dubuffet’s early paintings make striking use of areas of muddy smudges reflective of primordial moss and ooze in keeping with his respect for primitive states. Later works, such as his sculptures in the Hourloupe series, express these sentiments more geometrically in cartoon-like doodles with strong outlines that suggest puzzles. Created between 1969 and 1971, in Dubuffet’s Hourloupe series, the “Monument au Fantome” sculpture (Houston, Texas) has seven main elements made of painted fiberglass over stainless steel armature. It shows many stylistic elements in common with Gabarron’s.

In the 1970’s, the term, Outsider Art was coined to include pure Art Brut plus creations by any self-taught artist working outside the mainstream in naïve and fantasy-inspired styles. Gabarron’s work shows strong influences from Dubuffet’s Art Brut style and spirit. Gabarron’s early series, “Coleccion Lobo” is dominated by the dark smudges and primitive images characteristic of early Dubuffet paintings. Gabarron’s later works evolve into more joyful, colorful and monumental forms yet still evoke a sense of mystery and primitive power, as shown in his sculpture series, “Twelve European Muses,“ and in his impassioned statement that, “The main task that I confront daily in my studio is that of working with honesty.” (Urban Landscapes, p.17)

One thought on “Style & Inspiration”