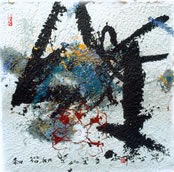 An ancient art in Gu Gan’s native China, calligraphy continues in its traditional form to this day, as well as emerging in hybrid forms that combine old and new elements. Principles of Chinese calligraphy exert a defining influence on a wide spectrum of contemporary Western art, including Impressionism of the 1800s, Expressionist, Gestural Avant Garde and Action Painting of the 1900s, as well as Indigenous Abstract and Indigenous Modernist of the 2000s.

“We, especially the artists grown up with the Abstract Expressionist school, owe so much to the Chinese calligraphers that we understand the emotional language of using the skills of the brush.” ~ Antonio Tapies, The Three Steps of Modern Calligraphy, 2005 p.126

At first glance, Gu Gan’s large, colorful paintings appear to be thoroughly abstract and extremely modern. As the viewer draws closer for a more detailed look, however, micro-landscapes and their inhabitants emerge, quite busy with various communal occupations, participating in athletics or interacting in social rituals. These representational portraits in the close-up views lend a different aura to the works than that of contemporary abstracts. For such miniature images, Gu Gan’s brushed characters and their shared concerns convey a surprisingly monumental intensity. Many transmit an ancient sense of pictographs painted across sun bleached rock face or inscribed on damp shadowed temple interiors. At the same time, many of the tiny figures appear to cavort and exercise with the humor and independent attitudes shown in contemporary urban graffiti on subway station walls. 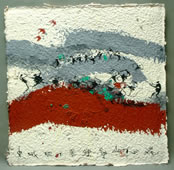 Morning Exercises by the Forbidden City

Each layer of Gu Gan’s artworks is realized in a spontaneous calligraphic style that imparts a fresh spirit, a reverence for history, as well as an imposing sense of mystery. Much of the pleasure from viewing Gu Gan’s works comes from the pursuit of decoding the beautiful mysteries. Hints to the code are offered in purely abstract shapes and symbols as well as in the unusually direct form of the written word.

Though traditional in Islamic religious works, Japanese prints, and in much of Eastern art, including written text in artworks is a relatively rare practice in Western art. It places Gu Gan’s works in line with several unusual ancient as well as contemporary artistic traditions such as Performance Art and Pluralism in the 1900s that employ various techniques to further their aims.

“Broaden the field of calligraphy and embody the modern spirits of our nationality.” ~ Gu Gan, The Three Steps of Modern Calligraphy, p.5, 2005 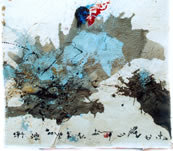 Gu Gan’s sport works, especially those portraying subjects related to the Olympic Games, have particularly accessible imagery and powers of communication because the activities shown are universally familiar and well-loved parts of many societies. The images of people at play also employ some of the most easily recognized calligraphic symbols to represent the human body, a key reference for technique in calligraphy.

“The wonderfulness of calligraphy depends on its nearness to the source of the human body.” ~ Sun Guoting, The Three Steps of Modern Calligraphy, p.144 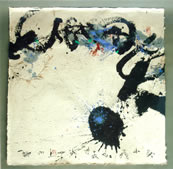 Be Happy in Waves

The symbolic use of different shaped lines to imply masculine and feminine bodies appears to be a universal practice, thus becoming one of the areas in which Eastern and Western art connoisseurs can decipher each others works easily.

“The calligraphic form-beauty of the two characters ‘man’ (lines) and ‘women’ (curves) in themselves embody the masculine and feminine beauty… This is one of the reasons why Chinese characters may develop into the artistry of calligraphy.” ~ Gu Gan, The Three Steps of Modern Calligraphy, p.147

“Line is the masculine beauty, and curve, the feminine beauty.” ~ Wassily Kandinsky, The Three Steps of Modern Calligraphy, p.144

Building on this universal visual symbolism for men and women, Gu Gan creates images of athletic exercise and group sports that are striking both in their extreme simplicity of line and their immediate ability to communicate complex sports scenes. His painting titled, Morning Exercises by the Forbidden City, is a beautiful and fascinating example. Buildings are shown by relatively straight lines while people are indicated in more fluid strokes. Gu Gan uses two symbolic colors to portray Beijing: vermillion and state-grey, with vermillion representing the rulers of China and grey representing civilians. The palace wall is indicated by an angular stroke of vermillion red. Across a rolling stroke of grey paint, the ink black people are indicated nearby practicing Tai Chi, jogging, and playing ‘bamboo diablolo.’ The red areas of the painting are balanced delicately with the grey areas. This is to communicate that if these two elements of the Chinese culture are in harmony, everything functions well.

The human figures in this painting are small and minimally drawn, almost stick figures. In larger representations of the human figure, men’s bodies are clearly indicated by sharp, almost stick figure angular strokes of paint, and women’s bodies are indicated by softer curved strokes. In more abstract paintings, rather than human bodies, the simplified version of those symbols, such as plain straight lines, can represent emotions thought of as ‘masculine,’ such as aggression. Unadorned curved lines can represent emotions that are thought of as feminine, such as softness. Calligraphy formed a key conceptual and practical base for Expressionism in Western art. Ancient global symbols from indigenous art provided links between East and West for better understanding of one another’s art.

“The leading figure of American abstract expressionism, Franz Kline’s black… lines have a quality quite similar to calligraphy. His vigor of strokes is as powerful as thunderbolts. Franz Kline’s works are good reference to the juncture of Orient and Western arts. Those Westerners who like his works will easily understand Chinese calligraphy.” ~ Gu Gan, The Three Steps of Modern Calligraphy, p.127

Another important artist to forge a strong East-West link was the Russian artist Wassily Kandinsky. Gu Gan cites his work as key to a Westerner’s understanding of Eastern art because Kandinsky included spiritual elements in his works and described his symbolism in his book, Dots, Lines and Planes. Kandinsky’s belief in an inner spirit of symbols coincides with Eastern theories of symbols.

“The theoretical study of dots, lines and planes, represented by Kandinsky is so profound that we Easterners who have been proud of our ‘kingdom of lines in picture,’ have to look at it with new eyes. Kandinsky analyzed not only dots, lines and planes in view of modern science (mathematics, mechanics, optics, etc.) but also their ‘inner spirit’ and ‘inner acoustics.’’ ~ Gu Gan, The Three Steps of Modern Calligraphy, p.122

Gu Gan lists three steps to modern calligraphy: knowledge of the skills, connection of paint strokes with feelings, and grasp of the inspirational essence.