Architect of Athletic Achievement – 1988 Sport Artist of the Year 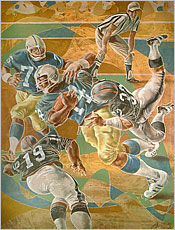 While studying under Swiss art historian and aesthetician Heinrich Wölfflin, Erni was exposed to the philosophy that “all pictures owe more to other pictures than they do to the [sic] nature.” As Wölfflin was Erni’s greatest influence besides Picasso and Braque, it is reasonable to assert that this philosophy would be the foundation of Erni’s own art philosophy, and eventually contribute to his affiliation and co-founding of the Abstract Alliance in Switzerland. “We were young. We had ideas,” Erni said. “Other artists were going in that direction. We just put our ideas together.”

After working in commercial art and participating in collective exhibitions in London, Erni achieved international acclaim for his 300-foot mural “Switzerland, the holiday destination of the nations” for the 1939 Swiss National Exhibition in Zurich. With the onset of World War II, Erni’s art career went on hold while he served as a driver in the Swiss Army Motorized Corps. 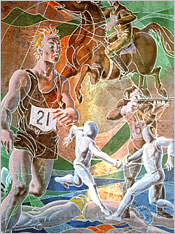 Post-World War II proved to be a prolific period artistically for Erni. Earning himself the name “Renaissance Man,” Erni produced paintings, frescos, mosaics, tapestries, graphics, theatrical costumes for operas, exhibitions and commissions for the likes of the World Health Organization and the United Nations Educational Scientific and Cultural Organization.

Erni designed more than 90 stamps for Switzerland and the United Nations during his career. His monolithic murals, posters and collection of stamps rallied a worldwide following. Proud of its native artist, the city of Lucerne became host to the Hans Erni Foundation in 1977 and two years later was home to the Hans Erni Museum revealing some of the artist’s best works and personality to the public. 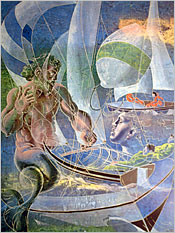 One art critic said of Erni’s body of work, “What gives his career particular grandeur is his constant effort to reconcile the world of machines and the dreams of the poet.” The pairing of the realism of machines and the abstraction of dreams describes Erni’s art as well as his personal motto, that “he who combines practicality with pleasure wins all the votes.” Erni lived and worked within the realm of this maxim, and his art concurrently became not only a practical exploration of the human experience, but a whimsical celebration of it.

Sir Herbert Read, Norton Professor of Fine Art at Harvard University said, “Certainly the most talented of those who have refused to despair, who have on the contrary dared to affirm life, who have even greatly dared to cast their joy in the face of destiny, is Hans Erni.” This commitment to the celebration of life made Erni an ideal candidate to produce several works for the International Olympic Committee including a mural, “Olympia – Myth and Reality” for the session hall of the International Olympic Committee in Lausanne, a gold medal in 1992, and exhibitions at several Olympic events. 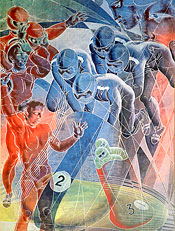