“I would like to be a skilled and consummate draftsman. I try to use a collection of sensuous colors, often revealing mysterious hidden forms, infusing them into an environment of endless nuances where abstraction and representational images are comfortable in the same space and where passion and humanity resonate.” ~ Paul Goodnight, Artist Statement, Color Circle Art

Goodnight’s description of his style could just as likely have been voiced by the great fathers of 19th century French Symbolism, Gustav Moreau and Odilon Redon, or later by Marc Chagall in the early 20th century. Moreau and Redon established Symbolism’s reverence for the power of myth using iconic images from history and allegories from the collective unconscious. They mixed representational and abstract elements in their works. These they surrounded with intense fields of color and large, visible brush strokes to indicate energy forces that became characters in the paintings as important as the human or animal figures. In Goodnight’s works, the areas of color and design also are as interesting and dominant as figures. The techniques and concepts of this early Symbolist movement proved useful to many 20th and 21st century artists seeking to include voices from history in their works. 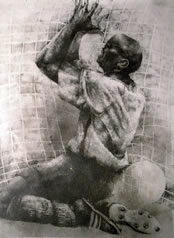 Another great French artist, Gustav Courbet, pioneered a concept that would become a cornerstone of art theory in the 20th century. Courbet broke from the preceding preference for selecting lofty, idyllic scenes by stating that his goal was to understand his subjects from firsthand experience.

“To know in order to be able to do… To be in a position to translate the habits, ideas, the appearance of my time… in a word, to make a living art, that is my aim.” Excerpt from Courbet’s manifesto of Realism; Modern Art, David Britt, Thames & Hudson, 1989, p. 305

Goodnight expresses a similar goal in his Artist Statement in Color Circle Art when he writes:

“I also try to offer the rich evidence of love in the composition of ordinary Black people whom I’ve witnessed in my travels around the world. Men, women and children who are familiar, intimate and engaging have stories written all over them, waiting to be told. My goal is to expose these stories to delight the eye and to satisfy the spirit – in short, to make them live.”

Along with such African-American masters as narrative muralist John Biggers and spiritual painter Alan Rohan Crite, Goodnight also credits contemporary artists Dana Chandler, Gary Rickson, and Paul Rahilly with having significant influence on his work. In the 20th century, the Modernist movement freed artists from adhering to any one style and promoted combining all styles needed to communicate.

“If my work can help others reach a greater understanding of some aspect of the African or American experience, that’s a positive thing… To define myself as an African-American artist doesn’t put limitations on me. Rather, it’s uplifting and it pays tribute to the fact that my ancestors came from a rich cultural heritage… The art world is so much larger than that! There’s literally room for anything and everything.” ~ Paul Goodnight

Goodnight continues to invent new combinations of styles to better communicate his themes. He explores different cultures in his trips to Africa, South America, Eastern Europe, the Caribbean, and China. The past and present of all these civilizations influence his art that functions as an ambassador for multi-cultural respect and appreciation of history.

“I see myself continuously working and traveling and making connections between where I was and where I am now.”  ~ Paul Goodnight