“I use a palette knife because I want to paint a lyrical drum song of motion, energy, rhythm, spirit, and spontaneity.” ~ Tafa

Tafa’s art style is often labeled Abstract Impressionism, though this label only partly covers the scope of his sources. Tafa cites traditional African wood carvings, Impressionism, Expressionism, and Michelangelo Buonarroti’s works as some of his major inspirations.

Though a product of art movements of the early 20th century, it is fitting that Impressionism exerts a strong artistic influence on this very 21st century artist. Impressionism ushered in an art revolution that blew away the confining realism of previous generations and ushered in techniques based on modern science that offered radical options for artists in all media. Now based on its influence, Tafa has expanded Impressionism’s principles into new visual and philosophic arenas to create his unique, contemporary, global art style.

One key aspect of contemporary art styles is visible respect for the art of native cultures. Tafa admires several of the core elements of traditional African wood sculpture: the streamlined abstraction of form that emphasizes its symbolic elements, the sense of intense power that directly confronts the viewer, and the monumental feeling that exudes from the largest to even the most miniature carvings. Tafa’s paintings incorporate these elements. The mastery of abstract design, the balance of proportion, and the depth of the colors create an intensity that makes it impossible to tell from a photograph what size one of his paintings might be. Even one of the smallest of Tafa’s portraits of sports arenas, the black and yellow oil titled, 3rd Quarter, conveys the immense power that emanates from a huge contemporary sports stadium during a spectator-packed game from within its remarkable 7¼” by 9” borders.

Inspired by the new technology of cameras, film,and modern printing, the pointillist techniques pioneered by 20th century Impressionist painters attempted to break color down into separate dots that fuse into recognizable forms in the viewers’ eyes only when seen at a distance. Tafa modifies this technique by painting split areas of color applied with a palette knife. This tool insists on large streaks of paint rather than delicate tiny dots. In the resulting paintings, Tafa achieves the shimmering effects desired by the Impressionists along with new layers of movement and intensity implied by the strong visible strips of knife-applied color that clearly communicate the physical force of the artist’s hand.

Tafa admires the genius of the 15th century Italian artist, Michelangelo’s paintings with his complete mastery of form, composition, and spiritual symbolism. Tafa aims to fuse these varied influences into his own style in order to capture brief moments of time, motion, and spiritual awakenings. Tafa views the sports stadium as a sort of temple and the game as a sort of religious ritual for today’s masses.

Tafa believes that sports offer rich contemporary themes for his symbolic aims because in sports the players are equal and excel only based on their levels of talent, teamwork, and strength of character. More than the individual star athlete, the arena where these contests of character take place interests Tafa as subjects for his paintings. As powerful as the ancient abstract masterpieces of Ashanti and Ewe weaving from his African heritage, Tafa’s contemporary masterpieces created in his Harlem studio are not portraits of people, but of universal moments of high energy, of miracles of movement and textural rhythms, and of the inspiration of heroism. 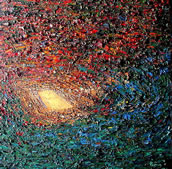