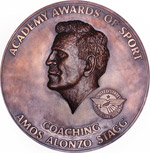 CRITERIA: The Amos Alonzo Stagg Coaching Award is presented to an individual who has experienced outstanding achievement as a coach for male teams. This person should exhibit a high standard of propriety, imagination, and innovation as a character-builder in the tradition of great teacher-coaches.

Amos Alonzo Stagg’s exemplary career is immortally enshrined not only for his all-time victory record of 314-199-35, but for his long-standing dedication to his life’s work as coach and teacher. His imagination and innovation spread into many sports during his 12 years as NCAA administrator and as an Olympic Committee member through six Olympiads. “The Grand Old Man” of the gridiron, as he was affectionately known, was active throughout his lifetime establishing present traditions and character-building dimensions as a player and a coach.