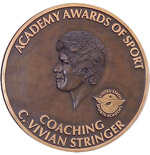 CRITERIA: The C. Vivian Stringer Coaching Award is presented to an individual who has experienced outstanding achievement as a coach for female teams. This person should exhibit a high standard of propriety, imagination, and innovation as a character-builder in the tradition of great teacher-coaches.