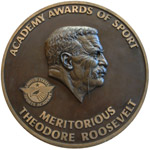 CRITERIA: The Theodore Roosevelt Meritorious Achievement Award is presented to an athlete in any amateur or professional sport, past or present, who has excelled not only on the playing field, but also as a contributor to both sport and society over at least a quarter of a century.