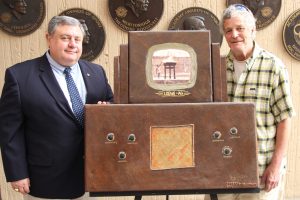 Zimlich said the painting is one in his latest in a series representing firsts in sports history, from Sumerian cave art of boxing to the present. The 1936 Berlin Olympic Games were the first in history to be televised, as the Nazi government employed a closed circuit television system to broadcast the games as a propaganda tool to large viewing halls in Berlin and other locations, where tens of thousands viewed on small television screens.  Use of the new communications medium, whose development had been subsidized by the government, was also intended to highlight Germany’s sophisticated technology.

In the assemblage, Zimlich depicts the lighting of the Olympic torch on a facsimile of an actual-size vintage television set of the type used in the 1936 broadcast.  Featuring an eight-by-eight-inch screen, the 3-D depiction of the television involves six individually stretched canvases painted to reflect the appropriate wood and details accurate right down to the speaker and control knobs, which are identified with Germany text.  The television stands approximately three feet high by three feet wide.  To ensure accuracy, Zimlich contacted Loewe Technologies GmbH in Germany, who he said was “kind enough to provide me with a photo and drawing of that historic Loewe AG. television.”

Ironically, 1936 was the Summer Olympics when Nazi Germany’s claims of Aryan supremacy backfired as African-American Jesse Owens bested Germany’s top athletes to win four gold medals. Owens, an Alabama native, achieved international fame by winning the 100 meters, 200 meters, long jump, and 4 × 100 meter relay. He was the most successful athlete at the games.

“Adolph Hitler, wanting to use the 1936 Berlin Olympics as a propaganda tool, placed the television viewing stations in Berlin and around Germany for full coverage,” Zimlich said.

“You can bet they didn’t televise any of Jesse Owens’s events. He defied everything that Hitler and his Aryan Nation stood for and when he was successful, they had mud on their face.”

Zimlich’s current donation is part of a series he is doing on “firsts” in sports, media and popular culture.  Works completed or in progress include the postage stamp of Jackie Robinson, who broke the color barrier in professional baseball; the first sports byline in a newspaper; the first telegraph transmission; and the first cave drawings.

Zimlich said his gifts were the result of a long-time association with ASAMA, which he called “arguably the largest sport art museum in the world, thanks to the vision of Academy Founding President Dr. Thomas P. Rosandich.”

“People of this area who have not seen this museum have really been missing out, and I would recommend that everyone visit.  This art truly represents sports history. It was also a brilliant move creating the Sport Artist of the Year Award, and each year the competition for that award gets tougher.”

Growing up in his family’s florist business in Mobile, Zimlich credits his father, Bob Zimlich, with teaching him art composition.

“He had me making dried arrangements by time I was 10 years old.”

Zimlich went on to study at the Atlanta College of Art and served as president and a member of the Board of Directors of Cathedral Square Art Gallery in Mobile, Ala.  As a member of the Academy’s Art committee (1999-present) and former Art Curator (2005-2013), Zimlich worked to help support key functions of ASAMA, including participating in the selection of the Sport Artists of the Year.