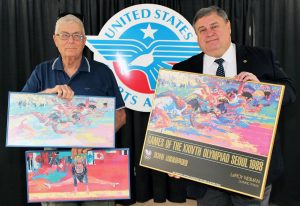 DAPHNE, Ala. – The United States Sports Academy recently received a donation of three LeRoy Neiman Olympic art posters to its American Sport Art Museum & Archives (ASAMA), expanding one of the museum’s most popular collections among visitors.

The posters, which feature the Seoul 1988 Olympic Games, were donated to ASAMA by Mobile, Ala., resident Harry R. Fisher. The posters feature swimming and gymnastics and were distributed by Fisher’s former employer, ARAMARK, to commemorate the 1988 Summer Olympic Games, which were hosted in Seoul, South Korea.

“I had this wonderful LeRoy Neiman art hanging in my house for many years and I have enjoyed it greatly,” Fisher said. “But now it is time for visitors to the American Sport Art Museum and Archives to enjoy it as much as I have.”

The Academy presented Neiman with its 2007 Sport Artist of the Year Award and several of his pieces are featured prominently in the Neiman Room adjacent to the Dr. Thomas P. Rosandich Gallery on the Academy campus. Neiman is credited by many as being the inventor of contemporary sport art. He died in 2012 at the age of 91.

Neiman’s other works on display at ASAMA include a collection of watercolor prints representing numerous sports in the 1972 Munich Olympics, as well as images of boxing, hockey, fencing and many others.

It is the second recent gift to ASAMA’s Neiman collection. Fairhope resident Jeff Hosterman recently donated an autographed print of Neiman’s “Portrait of a Tiger” to the Academy. Hosterman said some might associate the gift with the Auburn University mascot, which would complement another of the more popular Neiman prints at ASAMA – an image of legendary University of Alabama football coach Paul “Bear” Bryant.

His role in pop culture spanned for decades, creating works for Playboy magazine since its inception in 1954. The series “Man at His Leisure” appeared in the magazine for 15 years, and included his impressions of events such as the Grand Prix in Monaco, the Beatles in London and the running of the bulls in Pamplona, Spain.