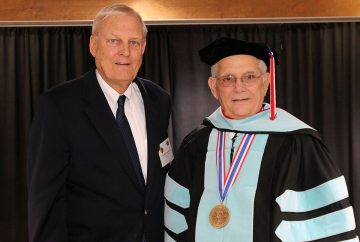 DAPHNE, Ala. – The United States Sports Academy is mourning the loss of Héctor Cardona, recipient of the Academy’s 2016 International Honorary Doctorate. Cardona was an international leader instrumental in the success of sport in Central America, South America and the Caribbean.

In November 2016, Cardona visited the Academy’s campus in Daphne, Ala., for the Academy’s Awards of Sport program, where he received his International Honorary Doctorate from Academy Trustee Dr. Gary Cunningham. At that event, Cardona stressed the importance of sport in a global society.

“In all my years as a sport organizer, I have witnessed the importance of sport in our society,” Cardona said. “We pursue one idea: that bringing people together in peace irrespective of race, religion or political affiliation benefits mankind. Now more than ever, sport is the universal language. We are committed to developing and protecting sport and the Olympic spirit.”

CACSO oversees the Central American and Caribbean Games, which are a multi-sport regional championship event held every four years, typically in the middle even year between the Summer Olympic Games. The CACG are for countries in Central America, the Caribbean, and certain participating South American countries. The event involves 31 nations in 41 sports.

Cardona was first elected CACSO president in 2000. Previously, he served as president of the Puerto Rico Olympic Committee for 17 years (1991-2008), executive council member of the Association of National Olympic Committees (2002-14), and executive member to the Pan American Sports Organization (1995-2000).

Cardona played AA baseball and distinguished himself in the 110-meter hurdles and long jump. His leadership accomplishments span six decades in administration, athlete development, the restructuring of the Olympic Committee, and the Olympic Movement. Cardona was inducted into the Puerto Rico Sports Hall of Fame in 2007.

For video of the Academy’s 2016 Awards of Sport program, including Cardona’s comments, visit: https://www.youtube.com/watch?v=YD9f3gVygJc&feature=youtu.be .

Each year the United States Sports Academy’s Awards of Sport program honors a wide range of accomplishments in sport and serves as “A Tribute to the Artist and the Athlete,” in conjunction with the Academy’s American Sport Art Museum and Archives (ASAMA).
The United States Sports Academy is an independent, non-profit, accredited, special mission sports university created to serve the nation and world with programs in instruction, research and service. The role of the Academy is to prepare men and women for careers in the profession of sports.