“A Tribute to the Human Spirit,” by renowned Spanish artist Cristóbal Gabarrón was painted in 1997 in honor of the 50th anniversary of Jackie Robinson breaking the color barrier in professional baseball and in celebration of the Academy’s 25th anniversary.

DAPHNE, Ala. — As Major League Baseball (MLB) this season celebrates the 70th anniversary of Jackie Robinson breaking professional baseball’s color barrier, the United States Sports Academy honors Robinson’s legacy every day with a two-story mural on the side of its building in Daphne, Ala.

The mural, “Tribute to the Human Spirit,” has become a landmark on Mobile Bay’s Eastern Shore, where it has been seen by millions as they travel on U.S. Highway 98 through Daphne. The towering stylized baseball batter was painted on the face of the Academy’s main building in 1997 by the great Spanish artist Cristóbal Gabarrón in a dual celebration of the Academy’s 25th Anniversary the 50th Anniversary of Robinson breaking the color barrier.

One of the largest public offerings of art in the United States, the mural is one of the most visible and renowned pieces of art at the Academy’s American Sport Art Museum & Archives (ASAMA).  Gabarrón, the Academy’s 1992 Sport Artist of the year, engaged the assistance of local school children in painting the work.

In 1947, Robinson took the field for the first time for the Brooklyn Dodgers, becoming the first African American player to participate in an MLB game. This year, MLB held several special activities on Jackie Robinson Day in April, including the unveiling of the Hall of Famer’s statue at Dodger Stadium in Los Angeles. In addition, MLB players wore Robinson’s number 42 during all league games that day. 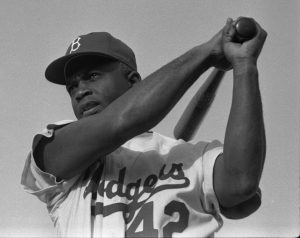 Robinson played second base for the Kansas City Monarchs of the Negro Leagues until he was signed by Brooklyn Dodgers general manager Branch Rickey. He endured a backlash from teammates and fans who opposed his presence in the game and also suffered threats to himself and his family. He joined the Dodgers’ farm team, the Montreal Royals, in 1946 and soon earned a promotion to the Dodgers, debuting for the team on 15 April 1947.

Gabarrón stated in an interpretation of the vibrant colored mural he painted that Jackie Robinson exemplified the “most exalted and universal values found in sport: dedication, sacrifice, solidarity, teamwork, friendship … all of which contribute to the common goal of success.”

The face of Robinson, who is depicted swinging at the plate, is half black and half white to signify the promise of racial harmony that sport provides, Gabarrón explained.

In addition to the mural, the Academy also annually honors Robinson’s memory with the awarding of the Jackie Robinson Humanitarian Award, which is presented to an individual who has “demonstrated a concern for mankind. This individual should exhibit the qualities of dedication, grace under pressure, personal sacrifice, compassion, hope, and dignity that characterize the promotion of human welfare and social reform.”

The criteria for the award reads in part: “Jack Roosevelt Robinson broke the baseball color barrier by displaying his skills, while at the same time subjugating his pride, to prove an awareness of our failings as well as his abilities. Had he lacked the discipline, not to mention the dedication, America and sport would be spiritually and athletically poorer.”

The award is part of the Academy’s Awards of Sport program, which each year since 1984 has served as “A Tribute to the Artist and the Athlete.” The Academy presents the awards to pay tribute to those who have made significant contributions to sport, in categories as diverse as the artist and the athlete in several different arenas of sport.