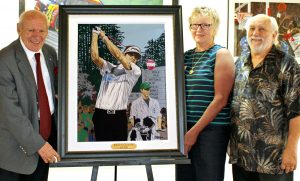 Known worldwide for his colorful paintings that depict a variety of sports, Rush presented the original work, titled “Right on Course,” to ASAMA after an anonymous benefactor purchased the painting to donate to the museum, where the work is now on permanent display.

Watson won the Masters championship at Augusta National Golf Club in Georgia in both 2012 and 2014, becoming only the 17th golfer to win the tournament’s coveted green jack twice since the event began in 1934. Rush said “Right on Course” depicts Watson at a time when a new group of golfers would step into the spotlight previously occupied by the greats like Jack Nicklaus, Arnold Palmer and Jerry Pate.

“I wanted to capture the idea of him being a leader in this crop of new and exciting young players,” Rush said. “It is amazing that a guy from Bagdad, Fla., who basically developed his swing on his own, can knock the ball a country mile. A guy like that, who has reached the pinnacle of a golfing career at a young age, really stands out from the rest. There have only been 17 golfers who have won the Masters twice, and he did it twice in three years. That’s remarkable.

“I wanted to capture the dichotomy of the ‘bigness’ of major golf and how Watson worked and sharpened his skills, essentially on his own, to capture the green jacket twice,” Rush said.

In the painting, Rush depicted Watson wearing the shirt he wore when he won the 2014 championship. The painting also features Watson’s signature pink driver, which he is known for using in support of breast cancer awareness.

Rush said the name, “Right on Course,” is perfect for the piece because the Masters at Augusta National was the right course for Watson at the right time.

“A reporter once asked Watson if he dreamed he would get this far in professional golf and he said, ‘my dreams never got this far,’” Rush said. “In the 2012 Masters he went into sudden death and he hooked his shot into the woods, into the pine trees. One of his staple philosophies is basically, ‘If I have a shot, I have a chance.’ He went into the rough and saw a crack between the pine needles hanging from the trees and some branches. He used a wedge and hooked his shot so much that it went right onto the green and ultimately gave him the win. He was right on course.”

The piece captures the intricacies of Watson’s swing, the golfer’s intensity and Augusta National’s towering pine trees and silky smooth greens. Rush said depicting Watson’s swing perfectly was important because of how much emphasis he places on practicing and perfecting his approach to the game.

“A golf swing is unique; golfers spend hours upon hours trying to perfect their swing,” Rush said. “The positioning and the turn and the hand movements are very intricate. If I don’t capture the swing in just the right way, golf fans will see it right away. I have to make sure the anatomy of the golfer is just right, too, because they don’t wear padding or helmets like some of the athletes do. Bubba is very intense on the course, and this painting really captures that.”

Numerous pieces of his art grace the walls at ASAMA including “Finishing Strong,” a NASCAR original piece which was also recently donated to the museum.

Rush, of Tuscaloosa, Ala., is the Academy’s 2011 Sport Artist of the Year in painting. The award is presented annually to an individual who captures the spirit and life of sport so that future generations can relive the drama of today’s competition.

“The Academy and its museum are an artistic marvel for me,” Rush said. “The Academy has made sports art not just an aside but a primary genre of high art and fine art. The museum and what the Academy has done culturally around the world is marvelous, impacting people and building an awareness of the world of fine art in sports.

Not only has Rush’s art been featured and collected around the world, the painter has also played a significant role in the world of sports art on the legal front, winning important gains for artists.  In 2003, Rush won a court battle for his right to draw, paint, and sell the images of star athletes when Tiger Woods sued for royalties on a painting Rush made of the golfer following the 1997 Masters. The Sixth Circuit Court of Appeals ruled in Rush’s favor, finding paintings to be a form of artistic expression protected by the First Amendment.

Prints of Rush’s Bubba Watson and NASCAR works and other art are available from the Academy bookstore at http://bookstore.ussa.edu/.