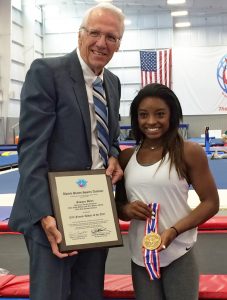 The United States Sports Academy has presented Olympic gymnast Simone Biles with its Female Athlete of the Year Award for 2016.

Academy non-resident faculty member Dr. Donn C. Renwick recently presented Biles with the award at the World Champions Centre in Spring, Texas, the city in which she currently resides.

American Olympic swimmer Michael Phelps was named the Academy’s 2016 Male Athlete of the Year. Phelps, an American swimmer, won a total of six medals – five gold and one silver – in the Rio 2016 Olympic Games. Phelps won gold in the 200 meter butterfly, 200 meter individual medley, 4×100 meter freestyle relay, 4×100 medley relay and 4×200 freestyle relay, as well as silver in the 100 meter butterfly. Phelps now holds the Olympic medal record with 28 total medals, 23 of which are gold, and is the most decorated Olympian of all time. Phelps is a three-time Academy Athlete of the Year, having previously won the honor in 2003 and 2008.

The awards are the culmination of the Academy’s yearlong selection process through which outstanding accomplishments of men and women in sports from around the globe are recognized. Each month, the public is invited to participate in the Academy’s worldwide Athlete of the Month program by nominating athletes and then voting online during the first week of every month. The online votes are used to guide the Academy selection committee in choosing the male and female monthly winners, who then become eligible for selection to the prestigious Athlete of the Year ballot.  A worldwide public vote on the annual ballot is used to guide the committee in making the final selection.

The men’s runner-up is Jamaican sprinter Usain Bolt, who retained the title of world’s fastest man by winning the 100 meter dash in 9.81 seconds in the Rio 2016 Olympic Games. He is the only man to win three consecutive 100 meter dash Olympic titles. Bolt also won his third consecutive Olympic gold in the 200 meters with a time of 19.79 and helped the Jamaican team win gold in the 4×100 relay. He has won nine total Olympic medals.

Third place among the males is Slovenian ski flyer Peter Prevc, who claimed victory at the International Ski Federation (FIS) Ski Jumping World Cup Finals in Planica, Slovenia, in March 2016. He won the ski flying event on his home hill with efforts of 223 meters (731.6 feet) and 232.5 meters (761.2 feet), giving him a winning tally of 426.5 points. Also in 2016, Prevc won the prestigious Four Hills Tournament and captured the title of Ski Flying World Champion.

The women’s runner-up is Hungarian swimmer Katinka Hosszu. Nicknamed “the Iron Lady,” Hosszu won three gold medals and one silver medal in the Rio 2016 Olympic Games. In earning gold, she also broke the world record in the 400-meter individual medley and broke the Olympic record in the 200-meter individual medley. She also earned gold in 100-meter backstroke and silver in 200-meter backstroke.

In third place is American tennis star Serena Williams, who won her 22nd Grand Slam title by beating Angelique Kerber in straight sets in the Wimbledon women’s singles final on 9 July 2016, her seventh Wimbledon singles title. Williams was previously voted the Academy’s female Athlete of the Year in 2015, 2012 and 2002.

The Athlete of the Year Award is part of the United States Sports Academy’s Awards of Sport program, which each year serves as “A Tribute to the Artist and the Athlete.” The Academy presents the awards to pay tribute to those who have made significant contributions to sport, in categories as diverse as the artist and the athlete in several different arenas of sport.

The awards honor exemplary achievement in coaching, all-around athletic performance, courage, humanitarian activity, fitness, and media, among others. The Academy’s American Sport Art Museum and Archives (ASAMA) annually recognizes these men and women through its Sport Artist of the Year, Honorary Doctorates, Medallion Series, Distinguished Service Awards, Outstanding Athletes, and Alumni of the Year awards. The Academy’s Awards of Sport program is currently in its 33rd year.