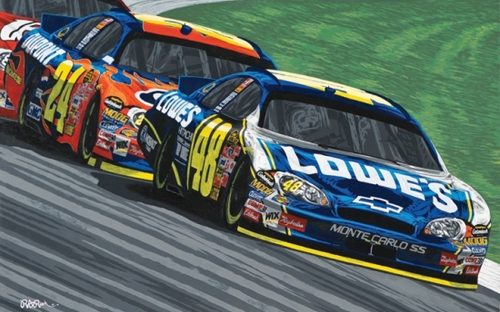 DAPHNE, Ala. – World renowned sports painter Rick Rush said his 2008 painting, “Finishing Strong,” was created to capture a significant event in the history of auto racing: the changing of the guard from the days of Dale Earnhardt Sr. to today’s Jimmie Johnson-dominated NASCAR landscape.

The artist – known worldwide for his colorful paintings that depict a variety of sports – recently presented the original work to the United States Sports Academy’s American Sport Art Museum & Archives (ASAMA).  An anonymous benefactor purchased the painting to donate to the museum, where the work is now on permanent display.

In 2011, the Academy named Rush its Sport Artist of the Year in painting. The award is presented annually to an individual who captures the spirit and life of sport so that future generations can relive the drama of today’s competition.  Numerous pieces of Rush’s art depicting a wide range of sports grace the walls of ASAMA.

“The piece represents that precise moment in NASCAR history that was the changing of the guard from the Dale Earnhardt Sr. era,” Rush said. “Jimmie Johnson had won the Sprint Cup twice and won it again that year as part of the Hendrick Motorsports team, which of course Jeff Gordon, who is also in the piece, was part of.  And Dale Earnhardt Jr., who is in the rear of the piece, was leaving his previous team to join Hendrick.

“It was nice to be able to capture the NASCAR fever we have in America and to show the changing of the guard in the sport,” Rush said.

“The popularity of NASCAR and auto racing is immense,” Rush said. “It is one of the most, if not the most, watched sport in the world. They will get 150,000 or more to come to a race at Talladega and Daytona.

“I have focused on racing’s big events – I did a piece on Earnhardt Sr. at the Daytona 500 and this piece on Jimmy Johnson,” Rush said.

“The Academy and the museum are an artistic marvel for me,” Rush said. “The Academy has made sports art not just an aside but a primary genre of high art and fine art. The museum and what the Academy has done culturally around the world is marvelous, impacting people and building an awareness of the world of fine art in sports.

His creations grace the collections of public museums and galleries around the world, as well as numerous private collections, and they line the walls at ASAMA.  He recounts with enthusiasm the sports memories behind his works.

“I have a fondness for all of my pieces,” Rush said. “I like them to be loose enough that you get the movement but still exacting and specific enough to know what is going on.

“The piece on Churchill Downs for the Kentucky Derby was fun,” he said. “That year was the great jockey Willie Shoemaker’s last ride, on a horse named Ferdinand. To be part of that was historic. Others, like when the American hockey team beat the Russians in the 1980s in Lake Placid, also provide great memories. It is like all of the pieces are old friends.”

Not only has Rush’s art been featured and collected around the world, the painter has also played a significant role in the world of sports art on the legal front, winning important gains for artists.  In 2003, Rush won a significant court battle for his right to draw, paint, and sell the images of star athletes when Tiger Woods sued for royalties on a painting Rush made of the golfer following the 1997 Master’s Golf Tournament. The Sixth Circuit Court of Appeals ruled in Rush’s favor, finding paintings to be a form of artistic expression and protected under the First Amendment.

Prints of Rush’s NASCAR work and other art are available from the Academy bookstore at http://bookstore.ussa.edu/ .

Based in Daphne, Ala., the United States Sports Academy is an independent, non-profit, accredited, special mission sports university created to serve the nation and world with programs in instruction, research, and service. The role of the Academy is to prepare men and women for careers in the profession of sports. For more information about the Academy, call (251) 626-3303 or visit www.ussa.edu.

Founded in 1984, ASAMA is dedicated to the preservation of sports art, history, and literature. The ASAMA collection is composed of nearly 2,000 works of sport art across a variety of media, including paintings, sculptures, assemblages, prints and photographs. The museum is open free to the public from 9 a.m. to 5 p.m. weekdays. For more information, go to www.asama.org.