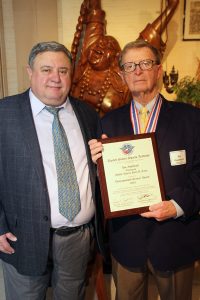 Given for outstanding contributions to sport, the award was presented to Gottfried at the home of Academy Founding President Dr. Thomas P. Rosandich. Academy trustee and Art Committee member Susan McCollough presented the award to Gottfried.

Gottfried currently serves as the chairman for the Mobile Sports Hall of Fame, which works to recognize and honor outstanding athletes and sports personalities from Mobile, Ala.

The Distinguished Service Award is part of the United States Sports Academy’s Awards of Sport, which each year serve as “A Tribute to the Artist and the Athlete.” The Academy presents the awards to pay tribute to those who have made significant contributions to sport, in categories as diverse as the artist and the athlete in several different arenas of sport. The awards honor exemplary achievement in coaching, all-around athletic performance, courage, humanitarian activity, fitness, and media, among others. The Academy’s American Sport Art Museum and Archives (ASAMA) annually recognizes these men and women through its Sport Artist of the Year, Honorary Doctorates, Distinguished Service Awards, Medallion Series, Outstanding Athletes, and Alumni of the Year awards.