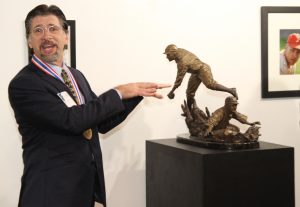 American sculptor Lou Cella was presented the United States Sports Academy’s 2018 Sport Artists of the Year, Sculptor, Award during a public art show and a “Tribute to the Artist and the Athlete” at the Academy.

Cella of Chicago, Ill., was presented the honor by Academy Trustee and Art Committee member Jack Scharr during the event on the Academy campus in Daphne, Ala. Cella is widely known for his works featured at famous sport venues across the United States, including Wrigley Field in Chicago; Comerica Park in Detroit, and the Green Bay Packers Heritage Trail in Wisconsin.

The event was part of the Academy’s Awards of Sport program, which honors those who have made significant contributions to sport in categories as diverse as the artist and the athlete. The Academy’s American Sport Art Museum and Archives (ASAMA) annually recognizes these men and women through its Sport Artist of the Year, Honorary Doctorates, Medallion Series, Athletes of the Year and Alumni of the Year awards.

Cella’s sculpture, “Cobb Steals Third,” is now a permanent part of the ASAMA collection. The piece is based on what is widely recognized as the greatest baseball action photo of all time. Shot by renowned photographer Charles Conlon, the photo depicted baseball legend Ty Cobb of the Detroit Tigers sliding into a base under the tag of Jimmy Austin of the New York Highlanders, who would later become the Yankees.

“Sports is a great unifier, and baseball I have found has this great family oriented quality to it,” Cella said. “My two great passions in life are sculpting and baseball, so when I am able to bring those together, it is a great, great thrill. And having my career come this far, and having this great (Academy) family invite me to be part of it, is just really humbling.”

Coming from a family of artists and growing up in the Chicago area, Cella studied both fine art and graphic design at Illinois State University. After several years working as a graphic artist, he moved to three-dimensional art working as a sculptor. His works range from extreme realism to existential creations, and he prefers to use fresh ideas from both to grow his works, which include both small and monument scale pieces in bronze.

In 1995 Cella joined Chicago’s famed Rotblatt/Amrany Studio of Fine Art, where his life-sized and larger works are in great demand for sport venues across the United States. Notable works include Harry Caray, Ernie Banks and Ron Santo at Wrigley Field; The Six Detroit Tigers and Ernie Harwell at Comerica Park in Detroit; quarterback Bart Starr for the Green Bay Packers Heritage Trail; Carlton Fisk at US Cellular Field in Chicago; and Ken Griffey Jr. at Safeco Field in Seattle.

“My parents are still alive, but my father is unable to travel. I truly wish my father was able to come here and see this,” Cella said. “I was never going to play for the Chicago Cubs, but as I often tell people who are interested in the arts, ‘don’t think because you won’t be a rock star, you have to give up being a musician… Don’t think that because you’ll never be quarterback at the University of Alabama that you can’t use your passion to be part of it in some other way. There is always something you can do. That’s something my parents helped me see.”

Cella’s sculpture of Ty Cobb at Comerica Park in Detroit was selected as one of the 25 Most Important Sports Statues by Complex magazine.

In addition to his works featuring the giants of sport, he has also sculpted historic pieces, including Orville Redenbacher for the town of Valparaiso, Ind.; Oakland University founder Matilda Dodge Wilson in Rochester, Mich.; and Father Hesburgh and Father Joyce memorials at the University of Notre Dame.