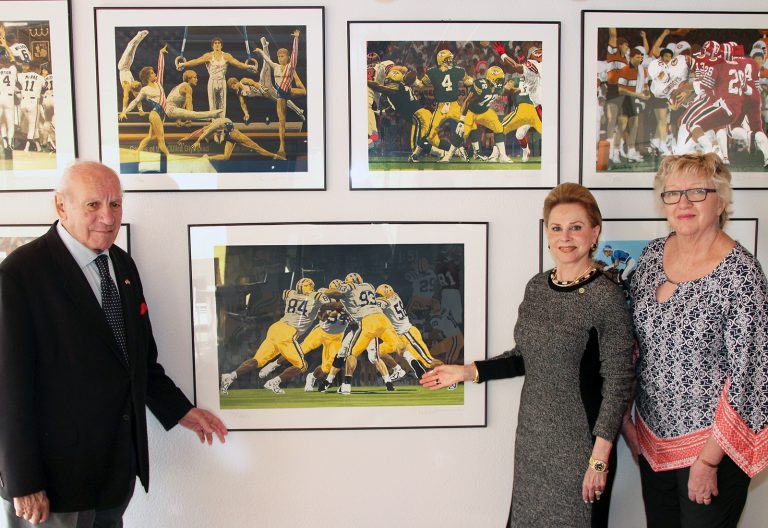 DAPHNE, Ala. – Two collectors of the work of world renowned sport artist and United States Sports Academy 2011 Sport Artist of the Year Rick Rush recently donated a large collection of his signed serigraphs to the collection of the Academy’s American Sport Art Museum & Archives (ASAMA).

Michael and Donna McIntyre of Destin, Fla., recently donated 46 Rick Rush signed prints to ASAMA, where many will be put on display along with the Academy’s already large collection of the artist’s works.   Rush, known as “America’s Sport Artist,” has gained a worldwide following for his colorful paintings that depict a variety of sports.

Numerous pieces of his art grace the walls at ASAMA including “Finishing Strong,” a NASCAR-themed original painting which was also donated to the museum and depicts legendary drivers Jimmie Johnson, Jeff Gordon and Dale Earnhardt Jr. The artist also presented to ASAMA an original work, “Right on Course,” which depicts famed golfer Bubba Watson winning his historic second Masters championship.

Rush, of Tuscaloosa, Ala., is the Academy’s 2011 Sport Artist of the Year in painting. The award is presented annually to an individual who captures the spirit and life of sport so that future generations can relive the drama of today’s competition.

“The Academy and its museum are an artistic marvel for me,” Rush said. “The Academy has made sports art not just an aside but a primary genre of high art and fine art. The museum and what the Academy has done culturally around the world is marvelous, touching people and building an awareness of the world of fine art in sports.

His creations, which are literal but have an impressionist feel, grace the collections of public museums and galleries around the world, as well as numerous private collections.  He recounts with enthusiasm the sports memories behind his works.

“I have a fondness for all of my pieces,” Rush said. “I like them to be loose enough that you get the movement but still exacting and specific enough to know what is going on.”

Not only has Rush’s art been featured and collected around the world, the painter has also played a significant role in the world of sports art on the legal front, winning important gains for artists.  In 2003, Rush won a court battle for his right to draw, paint, and sell the images of star athletes when Tiger Woods sued for royalties on a painting Rush made of the golfer following the 1997 Masters. The Sixth Circuit Court of Appeals ruled in Rush’s favor, finding paintings to be a form of artistic expression protected by the First Amendment.

The Academy has prints of Rush’s works and other art available from the Academy bookstore at http://bookstore.ussa.edu/.