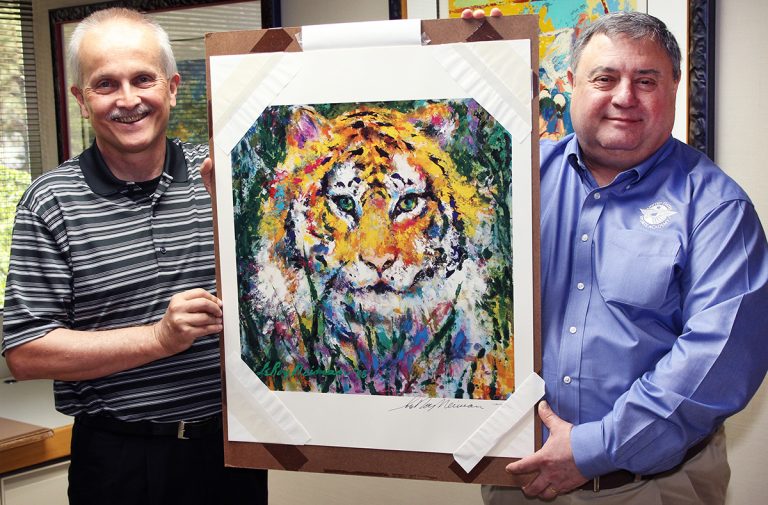 Jeff Hosterman donated “Portrait of a Tiger” to the Academy, which honored Neiman with its 2007 Sport Artist of the Year Award. Neiman, credited by many as the inventor of contemporary sport art, died in 2012 at the age of 91. ASAMA has several of his works on display.

Hosterman recently moved to Fairhope after retiring from the electronic banking industry in Atlanta. He said a visit to ASAMA as a new resident in the community inspired him to make the gift.

“The American Sport Art Museum and Archives is a beautiful place,” he said.

“The museum is the right place for this art, not at my home, so people can enjoy it with the rest of the great art here.”

“Portrait of a Tiger” depicts a colorful tiger staring off the canvas and stalking in the grass, featuring bright oranges, yellows and greens. The donor noted that the tiger is the mascot of his alma mater, Princeton University. He said some might associate the gift with the Auburn University mascot, which would complement another of the more popular Neiman prints at ASAMA – an image of legendary University of Alabama football coach Paul “Bear” Bryant.

Neiman’s other works on display at ASAMA include a collection of watercolor prints representing numerous sports in the 1972 Munich Olympics, as well as with images of boxing, hockey, fencing and many others.

Academy President and CEO Dr. Thomas P. Rosandich, who founded ASAMA in 1984, praised Neiman for his ability to portray sport action quickly through a variety of mediums.

“LeRoy Neiman’s name is synonymous with sport art,” Dr. Rosandich said. “When anyone would talk about sport art, they would inevitably mention his name. No one contributed more to sport art than he did with his presence on TV turning out great art. He was just as colorful as his paintings.”

“For an artist, watching Joe Namath throw a football or Willie Mays hit a baseball is an experience far more overpowering than painting a beautiful woman or leading political figure,” Neiman once said. “Concentrating on sports has helped me because I couldn’t refer back to past movements. There hasn’t been any sports art to speak of. I’ve had the field pretty much to myself.”

His role in pop culture spanned for decades, creating works for Playboy magazine since its inception in 1954. The series “Man at His Leisure” appeared in the magazine for 15 years, and included his impressions of events, such as the Grand Prix in Monaco, the Beatles in London and the running of the bulls in Pamplona, Spain.