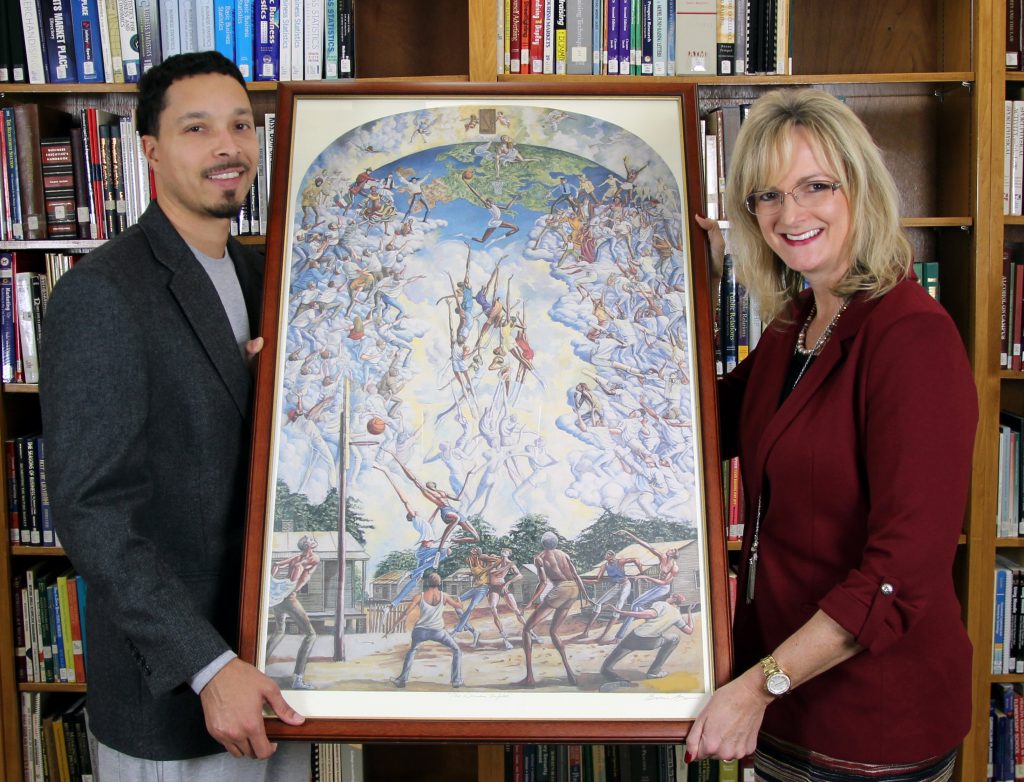 The United States Sports Academy’s American Sport Art Museum and Archives (ASAMA) has loaned six works from its collection to Stillman College for its campus art walk held in conjunction with the Dr. Martin Luther King Jr. holiday. The art walk is Saturday, 13 January 2018, from noon to 3 p.m. in Stillman’s Education Building Hall. Shown with “The Dream Unfolds” by the late Ernie Barnes, ASAMA Sport Artist of the Year in 1984 and 2004, are Kyris Brown, left, Stillman director of international affairs and recruiting, and Holly McLellan, dean of administration and finance at the Academy. 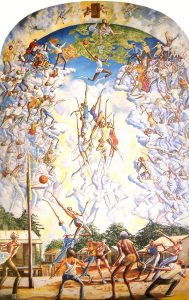 “The Dream Unfolds” by Ernie Barnes

DAPHNE, Ala. – The United States Sports Academy’s American Sport Art Museum and Archives (ASAMA) has loaned six works from its collection to Stillman College for its campus art walk held in conjunction with the Dr. Martin Luther King Jr. holiday.

The art walk is Saturday, 13 January 2018, from noon to 3 p.m. in the Education Building Hall on the Stillman campus in Tuscaloosa, Ala. 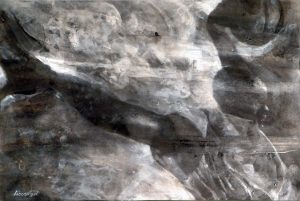 “I Can Fly” by Paul Goodnight

“The Dream Unfolds” by the late Ernie Barnes. Barnes, who played professional football in the early 1960s, is revered for his unique style of elongation and movement. The “Dream Unfolds” was commissioned by the National Basketball Association (NBA) in 1996 to celebrate its 50th Anniversary. The work shows multi-images of basketball players floating through the air, starting with a street pickup game and moving upward to an NBA rim skirmish. Barnes was the ASAMA Sport Artist of the Year in 1984 and 2004.

“I Can Fly” by Paul Goodnight. Returning from military service in Vietnam, Goodnight was haunted by nightmares from his war traumas that triggered a stutter so severe he could barely speak. In desperation, he turned to a childhood practice of using art to communicate, which led to his salvation – the awakening of true artistic talent. Since then the African-American artist’s work has been in high demand, often depicting triumph over adversity with an athletic theme. The abstract print “I Can Fly” by the ASAMA 1997 Sport Artist of the Year shows a basketball player “flying” through the air in triumph. 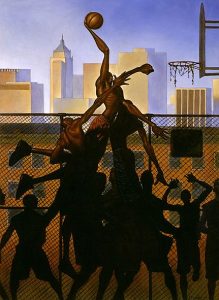 “Monarchs Dugout” and “Sky High Basketball/City Heights” by Kadir Nelson. Known for his rich, photographic quality paintings of sports figures, Nelson was the ASAMA 2009 Sport Artist of the Year. The African-American artist’s tour de force is his combination of dozens of illustrations from a series of large original oil paintings plus written text titled, “We Are the Ship: The Story of Negro League Baseball.” There were superstar caliber athletes in Negro League Baseball, but relatively few people knew of them because of the segregated social and sports policies of early to mid-20th century America. A New York Times best-seller, Nelson’s book tells their stories and inspires thousands of people today. The book gained Nelson the Coretta Scott King Book Award. A piece from that book, “Monarchs Dugout” richly depicts the Kansas City Monarchs dugout during the 1949 season. The other art walk image, “Sky High Basketball/City Heights,” reflects the richness and energy of Nelson’s sport art in a street basketball setting. 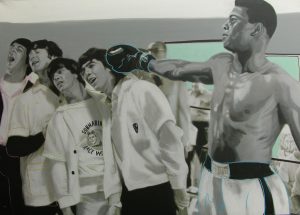 “Beatles and Muhammad Ali” by Steve Kaufman. This print of an iconic painting by the late pop artist and Andy Warhol apprentice Steve Kaufman commemorates the famous meeting on 18 February 1964 between the Beatles and Muhammad Ali. The Fab Four and the boxer simply known as “The Greatest” met in Miami as the band prepared for a concert and Ali, still known as Cassius Clay, prepared for his fight with Sonny Liston.

“Sugar Ray Leonard” by Stephen Holland. Sugar Ray Leonard’s ability in the boxing ring and his charisma outside of the ring made him a true superstar from the late 1970s to the late 1990s, landing him on numerous lists as one of the greatest boxers of all time. This work of accomplished New York sports painter Stephen Holland depicts Sugar Ray stealthily sizing up an opponent. 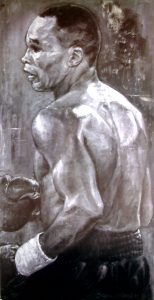 “The Academy’s American Sport Art Museum and Archives periodically lends its art to other institutions and we are particularly pleased to be involved with Stillman College in celebration of the life and work of Dr. Martin Luther King Jr.,” said Academy President and CEO Dr. T.J. Rosandich.

Founded in 1984 and located on the Academy campus, ASAMA is dedicated to the preservation of sports art, history, and literature. The ASAMA collection is composed of more than 1,800 works of sport art across a variety of media, including paintings, sculptures, assemblages, prints and photographs. The museum is open free to the public from 9 a.m. to 4 p.m. weekdays except holidays. For more information, go to www.asama.org. 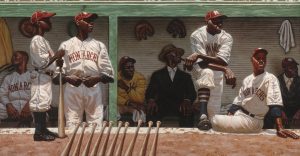 Located in Tuscaloosa, Ala., Stillman College is a liberal arts institution, committed to fostering academic excellence and to providing high quality educational opportunities for diverse populations with disparate levels of academic preparation. Primarily a teaching institution, Stillman has a proud and evolving tradition of preparing students for leadership and service in society. Stillman has a historical and covenantal affiliation with the Presbyterian Church (U.S.A.), whose Reformed tradition and commitment to the cultivation of the mind correspond well with the mission of the College. For more information, go to www.Stillman.edu.

The Academy and Stillman recently entered into an articulation agreement that aims to help students from the historically black college pursue careers in the world of sport. For more information, go to https://ussa.edu/news/united-states-sports-academy-signs-agreement-with-stillman-college-to-benefit-students-seeking-sports-careers/.

Both the Academy and Stillman are members of the Alabama Association of Independent Colleges and Universities (AAICU).