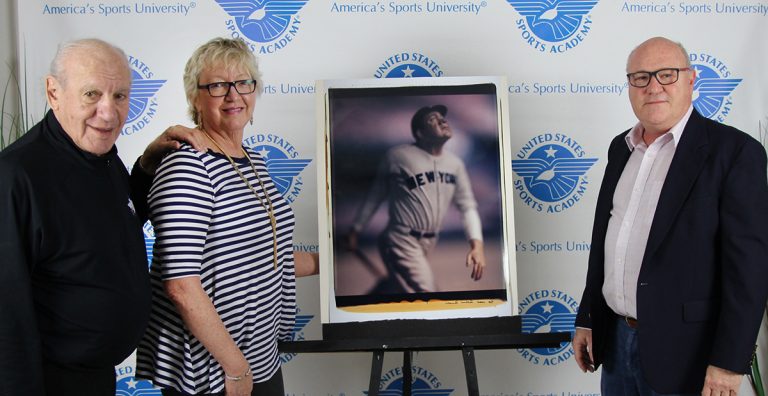 DAPHNE, Ala. – The United States Sports Academy has received an anonymous donation of 121 pieces of photographic art by world renowned photographer David Levinthal to add to its collection at the American Sport Art Museum and Archives (ASAMA).

Levinthal is known throughout the art world for using large-format 20×24 Polaroids to create unique oversized photo images with a close focus and shallow depth of field. Levinthal photographs small toys and props with dramatic lighting to construct small environments with varying subject matter – from sports to war to politics and pop culture.

Academy Art Committee member Stephen Savage said the pieces are a “wonderful addition to the ASAMA collection,” which is home to more than 1,800 works of sport art across a variety of media. Savage is a longtime professional photographer, art teacher and instructor of photography at Spring Hill College in Mobile, Ala.

“David Levinthal is world class,” Savage said. “The art here at the United States Sports Academy is tremendous, and his work is a great addition to the collection. These photographs are appreciated and highly valued in the art world.

“The thing that is interesting about David Levinthal is that he uses mundane figurines and creates this whole rich and colorful world around them,” Savage said. “That’s an incredible thing to do and his work is beautiful.

“Levinthal uses the large-format Polaroid camera and he gets extremely close to the subject itself, which creates a shallow depth of field. He creates these wonderful tableaus and puts these figurines in there. They are just plastic toys, but he is able to make them look so lifelike.

“There are not many people who do this style of photography, and there are very few who do it well,” Savage said. “David Levinthal is the best, of course.

“It is an accessible medium because everyone can enjoy these photographs. You see these toys, and I don’t know if it is because everyone grew up playing with them, but they are just so attractive.

“What makes Levinthal’s work special is that each piece he does is one of a kind,” Savage said.

“There are no copies, like you’d have in digital photography. Each photograph is a singular, unique piece. Even if you take two in a row of the same subject, each one is unique. That’s interesting. With Levinthal’s work the colors are so rich and saturated and the edges are beautiful. They are handsome works of art.”

“The Academy is truly appreciative of the anonymous donor who made this remarkable collection available to us, and we will in turn use it in our museum’s public service mission to show the close relationship between sport and art that goes back to beginning of the modern Olympic movement,” said Academy President and CEO Dr. T.J. Rosandich.

A resident of New York City who works in Manhattan, Levinthal earned a bachelor’s degree in studio art from Stanford University, a master’s degree in photography from Yale University and a scientiae magister in management science from the MIT Sloan School of Management. He also was the recipient of a Guggenheim Fellowship from the John Simon Guggenheim Memorial Foundation and a fellowship from the National Endowment for the Arts.

Levinthal’s work is included in permanent collections at the Art Institute of Chicago, the Centre Pompidou in Paris, the Corcoran Gallery of Art in Washington, D.C., the Los Angeles County Museum of Art, the Metropolitan Museum of Art and the Whitney Museum of American Art in New York City.  Levinthal is the co-author with writer Garry Trudeau of “Hitler Moves East,” which features his photography. His work has also been the focus of a 20-year retrospective by the International Center of Photography in New York.