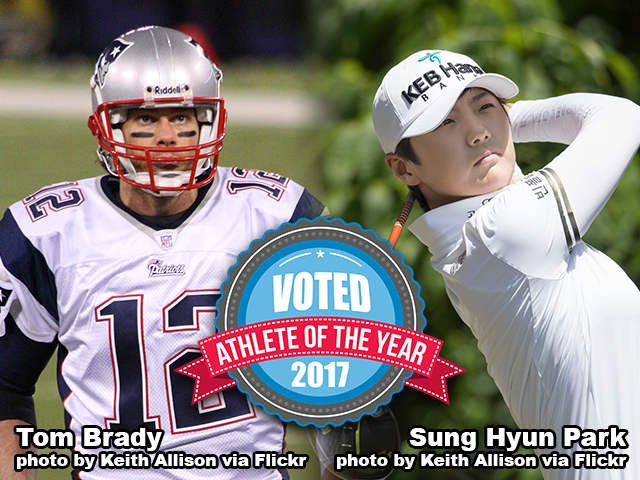 DAPHNE, Ala. – The United States Sports Academy has named New England Patriots quarterback Tom Brady and South Korean golfer Sung Hyun Park as the winners of its male and female Athlete of the Year awards for 2017.

Brady completed 43 of 62 passes for 466 yards and two touchdowns as the Patriots defeated the Atlanta Falcons 34-28 in Super Bowl LI on 5 February 2017. Brady was named the game’s MVP after leading the Patriots back from a 28-3 deficit in the third quarter, the largest comeback in Super Bowl history. His 466 passing yards and 62 passing attempts were Super Bowl records. Brady is also a leading candidate for the NFL’s 2017-18 MVP award, having led his team back to Super Bowl LII.  Brady is the only NFL quarterback to win five Super Bowls, and will have a chance for his sixth.  Brady was previously selected as the Academy’s male Athlete of the Year for 2015.

Rookie LPGA golfer Park, of the Republic of Korea, won the LPGA’s money title, shared LPGA Player of the Year honors with fellow South Korean golfer So Yeon Ryu and won the LPGA Rookie of the Year award. Park clinched the money title with $2.4 million earned this season and became just the third rookie ever to lead the LPGA tour in money. She is the first player since Nancy Lopez in 1978 to sweep the Rookie of the Year, Player of the Year and money titles in a season. She also finished second for the lowest scoring average at 69.247. Park won the U.S. Women’s Open and the Canadian Pacific Women’s Open.  She also became the first ever rookie to rise to number one in the Rolex Women’s World Golf rankings.

The Athlete of the Year awards are the culmination of the Academy’s yearlong selection process through which outstanding accomplishments of men and women in sports from around the globe are recognized. Each month, the public is invited to participate in the Academy’s worldwide Athlete of the Month program by nominating athletes and then voting online during the first week of every month. The online votes are used to guide the Academy selection committee in choosing the male and female monthly winners, who then become eligible for selection to the prestigious Athlete of the Year ballot.  A worldwide public vote on the annual ballot is used to guide the committee in making the final selection.

Thomas won the FedEx Cup – given to the top PGA golfer of the year – on 24 September 2017 after a second place finish in the Tour Championship. This season Thomas won five tournaments and his first major championship, the PGA Championship, in August. He is the fourth golfer since 1960 to win five times, including a major, in a PGA Tour season before his 25th birthday.  Thomas matched the U.S. Open single-round record of 63 at Erin Hills at the Sony Open in Hawaii Thomas became the seventh player in PGA Tour history to shoot a round of 59.

Durant was named the MVP of the NBA Finals series after scoring a team-high 39 points in the Warriors’ 129-120 series-clinching win against Cleveland on 12 June 2017. Durant scored at least 30 points in each of the series’ five games, averaging 35.2 points, 8.4 rebounds, 5.4 assists and 1.6 blocks per game. He also shot 55.5 percent from the field and made 47.4 percent of his three-pointers. Durant averaged 25.1 points, 8.3 rebounds, 4.8 assists and a .537 shooting percentage during the season.

Hurd was crowned the women’s all-around world champion at the 2017 Artistic Gymnastics World Championships in Montreal on 7 October 2017. Hurd scored a total of 55.232 points on vault, uneven bars, balance beam and floor routine to capture the title. The following day, Hurd took silver on the balance beam to close out the World Championships.

The Athlete of the Year Award is part of the United States Sports Academy’s Awards of Sport program, which each year serves as “A Tribute to the Artist and the Athlete.”  The Academy presents the awards to pay tribute to those who have made significant contributions to sport, in categories as diverse as the artist and the athlete in several different arenas of sport.

The awards honor exemplary achievement in coaching, all-around athletic performance, courage, humanitarian activity, fitness and media, among others. The Academy’s American Sport Art Museum and Archives (ASAMA) annually recognizes these men and women through its Sport Artist of the Year, Honorary Doctorates, Medallion Series, Distinguished Service Awards, Outstanding Athletes, and Alumni of the Year awards. This is the 33rd year of the Academy’s Awards of Sport program.

Founded in 1984, ASAMA is dedicated to the preservation of sports art, history, and literature. The ASAMA collection is composed of more than 1,800 works of sport art across a variety of media, including paintings, sculptures, assemblages, prints and photographs. The museum is open free to the public from 9 a.m. to 4 p.m. weekdays. For more information, go to www.asama.org.  A complete list of Athletes of the Year from all years is available at that site.