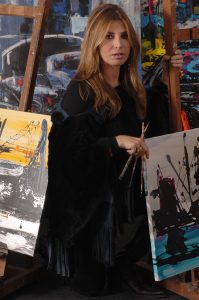 DAPHNE, Ala. – Two highly accomplished artists from different continents separated by thousands of miles are coming together for a joint exhibition in Greece through a relationship built upon shared involvement with the United States Sports Academy’s American Sport Art Museum & Archives (ASAMA).

Reflecting the global reach of the Academy and ASAMA, artists Dr. Mina Papatheodorou Valyraki of Athens, Greece, and B’Beth Weldon of Fairhope, Ala., will share a month-long exhibition in Athens entitled “Women Bridging Worlds: Celebrating Artistic and Cultural Crossroads.”

After an opening reception on Friday, 16 March 2018 at 7 p.m., the exhibition will run through 14 April 2018.  It will be held at the famed Ikastikos Kiklos Sianti Gallery in Athens. 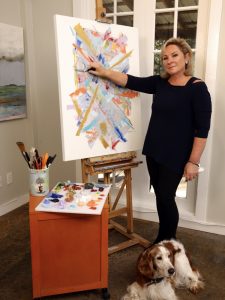 The two became acquainted through Academy Founding President Dr. Thomas P. Rosandich, who also founded ASAMA on the Academy campus in Daphne, Ala., where both artists have works on display.  The two artists met in Greece in 2017 and decided on the joint exhibit.

“Since I am from Greece, the country of the original Olympic Games and that gave birth to the highest level of art, sport and culture in the classical period of antiquity, I strongly believe that art and sport represent the mind and the body in perfect harmony,” Valyraki said.

“The United States Sports Academy, with its American Sport Art Museum & Archives, is unique in the world in supporting the arts through sports and vice versa,” she added.  “Our exhibition in Athens, Greece, the birthplace of the Olympic Games, is a result of the Academy. 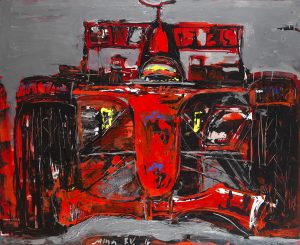 “Through its Founding President Dr. Thomas P. Rosandich and current President and CEO Dr. T.J. Rosandich, the Academy brought me together with the excellent artist and great friend, B’Beth Weldon,” Valyraki said.

“Due to a friendship which developed through our association with the Academy and our friendships with the Rosandiches, Mina and I decided to celebrate this union based on our connection with sport art, the Academy, our art, friendship, and our different countries, with virtually with no borders, and the Academy being the ‘crossroad’ we share,” Weldon said.

“Mina and I had a mutual understanding and respect immediately of each other, our interests, and the direction we wanted to go with our art, friendship, and adventures,” Weldon added.

“‘Women Bridging Worlds’ is a meaningful title of a joint exhibition of two women exploring the world of art, across the ocean and among two continents,” Valyraki said. “It is art, sport and culture than connect people.  The universal language of the arts is bridging people and creating friendships all over the world.”

“I love the title of our show, as I feel Mina and I will be able to ‘bridge borders’ through our art while sharing it on a soulful level with gratitude and interaction with our audience,” Weldon said.

“Our works share the characteristics of movement through light and freedom,” Valyraki said.  “There is an exceptional instinct that makes the colors appear pulsing and that the color gestures are in perpetual movement. Our artistic language has much in common.” 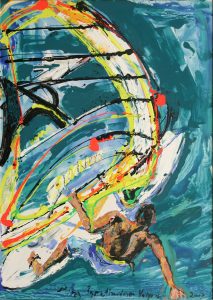 Windsurfing Gone with the Wind by Mina Valyraki

“We have had a wonderful time planning our joint exhibition in Ikastikos Kiklos Sianti, one of the most renowned and famous galleries in Athens, Greece,” Weldon added.  “I’m looking forward to this exhibition with Mina and the energy and dialogue we have to share with our guests, friends and communities.”

Both artists are known for their use of light and color to reflect constant, vibrant movement. Valyraki’s works in the exhibit will feature cranes, ships and her urban series, which includes works featuring interactions between automobiles and the landscape.  Weldon’s works will include her “Prismatic Series,” “Urban Series,” and her “Blue Paintings.” 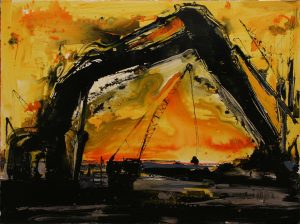 Valyraki is known worldwide for her abstract expressionist paintings featuring a variety of subjects from athletes to automobiles. In 2013, she was awarded the Guirlande d’Honneur, the highest award presented by the Federation Internationale Cinema Television Sportifs (FICTS), an organization that promotes the values of sport through film and television.  In 2017 she received the FICTS Mention D’Honneur Award in Arts and Sports. She won the International Olympic Committee’s 2014 Art and Sport Award.

Valyraki’s pieces can be viewed across the globe in such locales as the National Gallery in Athens, the Olympic Museum of Lausanne and the United Nations Building in New York, N.Y.  Valyraki’s acrylic painting, “Still Life in Yellow,” became a permanent piece in the National Museum of Women in the Arts in Washington, D.C. 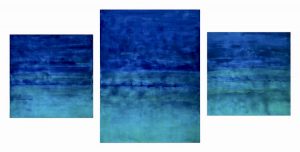 In 1998, Valyraki received one of many notable honors of her career when she was commissioned as the official painter of the 35th anniversary of the Italian sports car brand, Lamborghini. Her nearly 60-foot long painting, “La Storia Della Lamborghini,” continues to adorn the Lamborghini headquarters.

Valyraki has become internationally known for her ability to capture the movement of athletes and to instill in her work a sense of perpetual motion through the use of impressionist technique, vibrant color, precise lighting, and gifted brush stroke.

“My works are what is retained by those who look at them and penetrate into them,” Valyraki said. “They become one with them. Then the ‘communicative code’ really takes shape.” 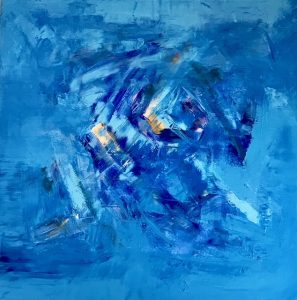 Sailing into the Blue by B’Beth Weldon

Weldon is an internationally exhibited and collected artist and has her studio in Fairhope, Ala. Recognized for her abstracts, landscapes and sport art, Weldon’s award-winning work can be found in galleries and select public and private collections in the United States, Europe and Asia, including ASAMA, Beijing Sport University, RCA Records, and the Renaissance Hotel.

Weldon has a strong following for her commissions and has participated in numerous solo, two-person and group exhibitions nationally and internationally.

Along with exhibitions, Weldon’s art has been featured in the movie “Runaway Island” directed by Diane Houston, the series “The Cowboy Way 3” produced by Glassman Media, and numerous publications. Due to its positive and healing qualities, her art has been acquired by numerous healthcare facilities and hospitals.

“I am inspired by color, light and the energy that makes things work,” Weldon said. 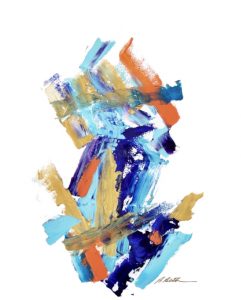 Off the Page by B’Beth Weldon

“I enjoy creating work that captures the essence of the moment and invites the viewer to join in this celebration.  As I create, I draw upon my experiences and inspiration from nature and sport. Whether using brush, palette knife or drawing with pen, I combine the use of gestural marks, free-flowing movement and exuberant colors to bring my subjects and abstracts to life.”

Weldon created the “Gifted Masterpieces Workshops,” which give people of all ages with intellectual or physical challenges the opportunity to learn to paint with her. These workshops encourage inclusion and provide inspiration not only to those with special needs and challenges, but to critically ill patients, their families, and support groups as well. She has taught these workshops in the United States, China and Europe.

Among other humanitarian activities, she has served as the official artist for two major events in the Mobile, Ala., region: the Point Clear Charities “Polo at the Point” and Providence Hospital Foundation’s “Festival of Flowers.”

Weldon was educated at Mount Vernon College in Washington, D.C., where she earned bachelor’s degrees in arts and humanities and business administration. 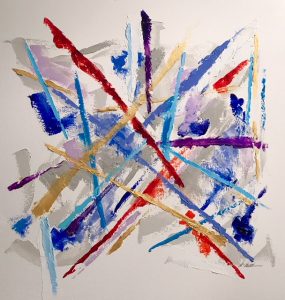 Burst of Color I by B’Beth Weldon

Known as “America’s Sports University®,” The Academy has a long history of supporting sport art, including coordinating the International Olympic Committee’s Art Competition for many years and each year awarding the Sport Artist of the Year through its Awards of Sport program.